Documentary Screening: With Olive Groves in the Aegean: Greeks & Turks 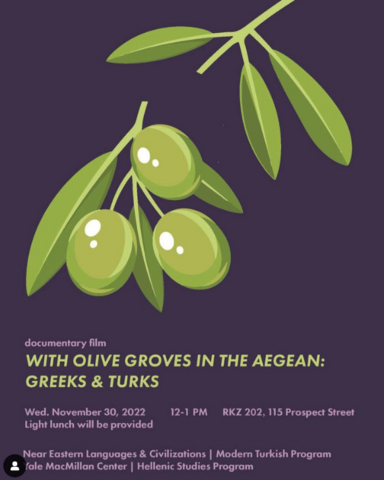 In 1923 when Mustafa Kemal Atatürk rebuilt modern Turkey on the ashes of the Ottoman Empire, the Treaty of Lausanne ordered that all Muslims of Turkish decent who were living in Greece be exchanged with any Greek Christians living in Asia Minor. This population exchange of nearly two million people has left deep traces, many of which are still perceptible today. Fortunately one thing soothed the resulting pain and resentment: both Greeks and Turks had been growing olive trees since the olden days, providing a main source of survival and wealth. They lost their homes, but found new olive groves offering the livelihoods they needed.