Between Turkish Nationalism and Greek Irredentism: The Greek Orthodox Community of Istanbul (ca. 1908-1923) 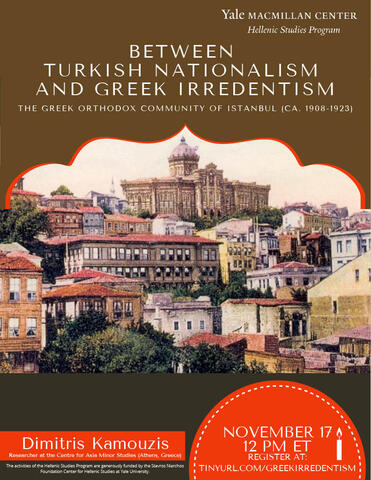 Dimitris Kamouzis is a Researcher at the Centre for Asia Minor Studies (Athens, Greece). He received his PhD in History at the Department of Byzantine and Modern Greek Studies, King’s College London. He has written several articles on the Greek Orthodox populations of the Ottoman Empire/Turkey and is co-editor of the collective volume State – Nationalisms in the Ottoman Empire, Greece and Turkey: Orthodox and Muslims, 1830-1945 (Oxon: SOAS/ Routledge Studies on the Middle East, 2013). His research interests include Non-Muslim Minorities in the Ottoman Empire/Turkey, Greek-Turkish Relations, History of the Greek Diaspora, Oral History, Refugee Studies, and the History of Humanitarianism.
Sponsored by the Hellenic Studies Program at Yale University. The activities of the Hellenic Studies Program are generously funded by the Stavros Niarchos Foundation Center for Hellenic Studies at Yale University.