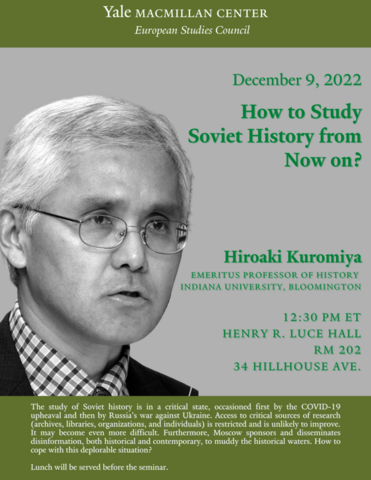 The European & Russian Studies Community features Hiroaki Kuromiya, Emeritus Professor of History, Indiana University, Bloomington
The study of Soviet history is in a critical state, occasioned first by the Covid upheaval and then by Russia’s war against Ukraine. Access to critical sources of research (archives, libraries, organizations, and individuals) is restricted and is unlikely to improve. It may become even more difficult. Furthermore, Moscow sponsors and disseminates disinformation, both historical and contemporary, to muddy the historical waters. How to cope with this deplorable situation?
Topics to be discussed include the following:
1) Whether an “archival revolution” actually took place when the formerly closed archives and archival files began to open up in the-post Soviet era,
2) The current situation of access to the archives in some of the former Soviet republics,
3) The importance of non-Russian archives and the centrality of the archives Russia still holds,
4) Strategies to pursue in case archival access is blocked or restricted.
Lunch at 12:30 pm, seminar with Professor Kuromiya at 12:45 pm
Bio: Japanese-American historian, professor in the Department of History, University of Indiana, studies modern and contemporary Ukraine in a wider context of Eurasian history. He has written on the Donbas, historical and contemporary, the Holodomor, the Great Terror, and other subjects mainly during the Stalin era. His publications include books Freedom and Terror in the Donbas: A Ukrainian-Russian Borderland, 1870s–1990s, The Voices of the Dead: Stalin’s Great Terror in the 1930s, and The Eurasian Triangle: Russia, the Caucasus, and Japan, 1904-1945 (with Georges Mamoulia), as well as numerous articles.