The Shoah in Lithuania: A Different Approach; New Insights 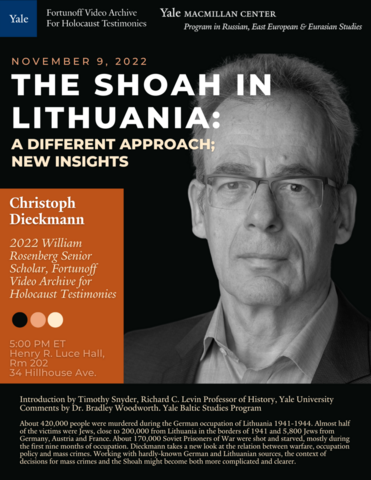 On November 9, 2022, please join the Fortunoff Archive, the Russian, East European, and Eurasian Studies Program, the Whitney and Betty MacMillan Center for International and Area Studies, and the Baltic Studies Program for The Shoah in Lithuania: A Different Approach; New Insights, presented by Dr. Christoph Dieckmann (Vienna Wiesenthal Institute). Timothy Snyder (Richard C. Levin Professor of History and faculty advisor to the Fortunoff Archive) will introduce the program and Bradley Woodworth (Baltic Studies Program Manager) will provide comments.
About 420,000 people were murdered during the German occupation of Lithuania 1941-1944. Almost half of the victims were Jews, close to 200,000 from Lithuania in the borders of 1941 and 5,800 Jews from Germany, Austria and France. About 170,000 Soviet Prisoners of War were shot and starved, mostly during the first nine months of occupation. Dieckmann takes a new look at the relation between warfare, occupation policy and mass crimes. Working with hardly-known German and Lithuanian sources, the context of decisions for mass crimes and the Shoah might become both more complicated and clearer.
Dr. Christoph Dieckmann is the William Rosenberg Senior Scholar at the Fortunoff Video Archive. He taught Modern European History at Keele University, United Kingdom, researched Yiddish historiography of the Russian Civil War at the Fritz Bauer Institut in Frankfurt am Main, and has worked as a postdoctoral researcher at the University of Bern on the project “Sounds of anti-Jewish Persecution.” At present he is teaching – mostly via Zoom – at Haifa University in the Weiss-Livnat International Program of Holocaust Studies. His study Deutsche Besatzungspolitik in Litauen 1941-1944 [German Occupation Policy in Lithuania 1941-1944] was published in 2011 and was awarded the Yad Vashem International Book Prize for Holocaust Research in 2012. He co-edited the Deskcalendar Heinrich Himmlers 1941/42 (Hamburg 1999), and has published on ghettos (2009) and the impact of German warfare on mass crimes (2015). His latest publications include 2021’s How Did It Happen? Understanding the Holocaust Lithuanian with author Ruta Vanagaite, based on a series of talks with Dieckmann on the common history of Germany and Lithuania in Europe during the Shoah. In spring 2022, Dieckmann and Arkadi Zeltser edited Distrust, Animosity, Solidarity, a book by Yad Vashem Publications on the relation of Jews and Non-Jews during the Shoah in the Soviet Union.