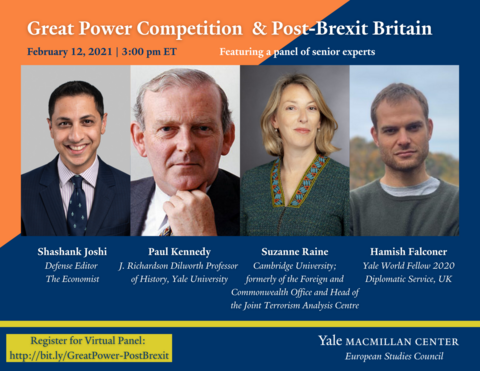 The European Studies Council will host a panel of experts on “Great Power Competition and post-Brexit Britain”
Featuring the following speakers:
Paul Kennedy, J. Richardson Dilworth Professor of History, Yale University
Shashank Joshi, Defense Editor of The Economist
Suzanne Raine, Lecturer, Cambridge University; formerly of the UK’s Foreign and Commonwealth Office and Head of the Joint Terrorism Assessment Centre
Hamish Falconer, member of Britain’s diplomatic service, European Studies Council Visiting Fellow (Spring 2021), Yale World Fellow 2020
Please register for the virtual event: http://bit.ly/GreatPower-PostBrexit
Suzanne Raine served in the Foreign and Commonwealth Office from 1995-2019, including postings in Poland, Iraq (2003) and Pakistan (2006-9). She worked primarily on national security issues and specialised in counter-terrorism, holding a number of senior domestic appointments including Head of the Joint Terrorism Analysis Centre from 2015-2017. She was also a senior member of the HMG’s assessment community and is particularly interested in the role of assessment in strategic decision making at a time of crisis.
Suzanne was born in Germany and educated at Peterhouse, Cambridge where she was awarded a double first in history, specialising in German history. She is now an affiliated lecturer at the Forum on Geopolitics, Cambridge University and member of the Board of Trustees of the Imperial War Museum and the Royal United Services Institute.
Shashank Joshi is The Economist‘s defence editor. Prior to joining The Economist in 2018, he served as Senior Research Fellow at the Royal United Services Institute (RUSI) and Research Associate at Oxford University’s Changing Character of War Programme. He has published books on Iran’s nuclear programme and India’s armed forces, written for a wide range of newspapers and journals, and appeared regularly on radio and television. He holds degrees from Cambridge and Harvard, where he served as a Kennedy Scholar from Britain to the United States.
Paul M. Kennedy is the J. Richardson Dilworth Professor of History and Distinguished Fellow of the Brady-Johnson Program in Grand Strategy. He served as the director of ISS from 1989 until 2017, and he is now the director of the maritime and naval studies initiative.
A native of northern England, Professor Kennedy obtained his BA at Newcastle University and his D.Phil at the University of Oxford. He is a former Fellow of the Institute for Advanced Studies, Princeton University, and of the Alexander von Humboldt-Stiftung, Bonn. He holds many honorary degrees, and is a Fellow of the Royal Historical Society, the American Philosophical Society, and the American Academy of Arts and Sciences. He was made Commander of the Order of the British Empire (C.B.E.) in 2000 for services to History and elected a Fellow of the British Academy in June 2003. He is the author or editor of nineteen books, including The Rise of the Anglo-German Antagonism, The War Plans of the Great Powers, The Realities Behind Diplomacy, and Preparing for the Twenty-First Century. His best-known work is The Rise and Fall of the Great Powers (Random House), which provoked an intense debate on its publication in 1988 and has been translated into over twenty languages. He is on the editorial board of numerous scholarly journals and writes for The New York Times, The Atlantic, and many foreign-language newspapers and magazines. His monthly column on current global issues is distributed worldwide by the Los Angeles Times Syndicate/Tribune Media Services.
His latest book, Engineers of Victory: The Problem Solvers who Turned the Tide in the Second World War, was published in 2013 by Random House. He is now working on a study of sea power in the same war, and recently completed a new foreword to his classic 1976 book, The Rise and Fall of British Naval Mastery.