Britain and the EU after Brexit 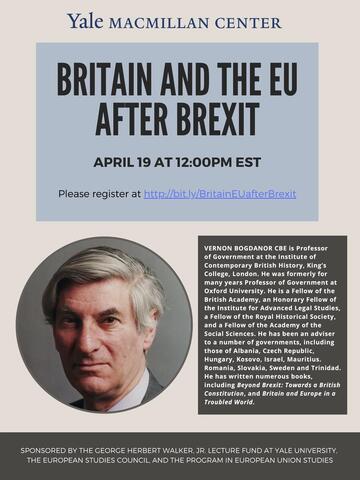 Please register at http://bit.ly/BritainEUafterBrexit
VERNON BOGDANOR CBE is Professor of Government at the Institute of Contemporary British History, King’s College, London. He was formerly for many years Professor of Government at Oxford University. He is a Fellow of the British Academy, an Honorary Fellow of the Institute for Advanced Legal Studies, a Fellow of the Royal Historical Society, and a Fellow of the Academy of the Social Sciences. He has been an adviser to a number of governments, including those of Albania, Czech Republic, Hungary, Kosovo, Israel, Mauritius. Romania, Slovakia, Sweden and Trinidad. He has written numerous books, including Beyond Brexit: Towards a British Constitution, and Britain and Europe in a Troubled World.