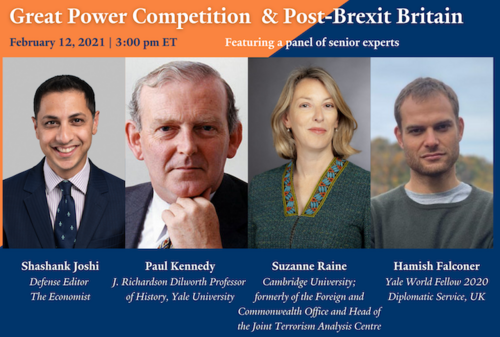 Britain’s departure from the European Union leaves it with foreign and security policy choices both significant and familiar. While Britain’s debate echoes with its past, it is relevant to the geopolitical deliberations of other middle powers as they consider China’s rise.

Professor Kennedy opened with reflections on the significance of China’s rise: no other nation had changed as significantly over the last 30 years, they now stood ‘eyeball to eyeball’ with the US, as its most significant economic and military competitor since 1945. But the panel differed on whether the UK should exert itself significantly in response. Joshi was optimistic about Britain’s ‘maritime tilt’ and the emphasis on cyber and space capability in its upcoming ‘integrated review’ of its defence and security policy. Joshi noted that the UK’s contribution in the Indo-Pacific was potentially significant, paired with France it could generate a meaningful     uplift in US naval strength. Regional actors such as the Japanese, Indians and Chinese themselves gave greater credence to the significance of UK decision making in this area than UK commentators did.

“In a world in which the margin of American military superiority is reducing…its alliances with middle powers are increasingly important.” Shashank Joshi

Joshi argued not only that this mattered for alliance politics, but that it was worthwhile to take part in coalition with those seeking to manage China’s rise. Freedom of navigation and core principles of a rule based international order are at stake and should they be breached in the Indo-Pacific, Brits should not underestimate how contagious that might prove to other geographies. Others have made similar arguments; the British Foreign Secretary and First Sea Lord (the head of the UK’s Navy) have both argued that given Asia’s rapid economic growth, naval power can help enable UK trade into the region, undergirding a hoped for source of UK growth. Raine later returned to the theme of values, highlighting the mistreatment, and likely genocide of the Uighurs in Xinjiang.

“If we mean what we say, then we need to be prepared to do something about it. If we don’t [about genocide etc] what are we all for?” Suzanne Raine

But Kennedy was unconvinced by the prospect of Britain sailing forth to contest China: Britain might make a niche contribution under the waterline with our attack submarines, a weapon that the Chinese genuinely feared, but it was unwise for the UK to seek to assert itself too boldly so far outside its home region, particularly in such an expensive and dangerous domain. Building up British naval strength after a period of relative decline was desirable, but placing those relatively few, exquisitely expensive assets at risk in Indo-Pacific waters in any serious way was foolhardy.
Raine also sought to challenge the contention that it was desirable to significantly recalibrate UK strategy away from counter terrorism and its associated missions. There was no sign that terrorism was in any serious way on the decline, indeed the environment looked to her experienced eye as though there had been no significant improvement to the underlying conditions which gave rise to 9/11 and in many cases the conditions were worse. 9/11, she reminded the audience, had a more profound impact on the actual observed behaviour of states than any other event of recent decades: terrorists and non-state groups would therefore continue to be as ‘strategic’ an issue as great power competition, even if its antagonists were non-state actors. Raine argued that the last few decades also demonstrated that fighting terrorism was about the only fight that Western publics were prepared to engage in (and as President Putin has argued, the damage caused by serious inter-state war would be unendurable). Raine argued the UK would be poorly served by pivoting too emphatically away from the counter-terrorism capabilities which were both more likely to see use and were admired by its partners.

In response, the panel discussed whether such a binary choice would be necessary: Joshi argued for investment at both ends of the spectrum: high-end naval assets as well as counter-terrorism capable land forces. Joshi highlighted that the UK military’s Integrated Operating Concept seemed to envisage more working with partner forces, such as the Syrian Kurds, on potentially lethal operations, an uncomfortable challenge given the likely human rights complexities of operating with non-NATO partner forces. Raine thought this welcome, that the UK and US had to decide whether they wanted to ‘fill the space’; taking action to solve global problems or to leave others to fill the vacuum as Russia had in Syria.. By contrast, Kennedy felt the UK should not repeat what he believed was a Russian error in getting bogged down in Syria: the UK should welcome even greater engagement on Russia’s part there, as it would be likely to simply sap their resources rather than meaningfully enhance their geopolitical strength.

“I would go for a D10 but only if we were joining in, not attempting to punch above our weight.” Professor Kennedy

Differing views about Britain’s relative potential for influence carried itself into discussion of our diplomatic posture. Joshi was supportive of  the proposal that the UK take a leading role in establishing an grouping of ten democracies (the ‘D10’) to strengthen their collective geopolitical position. Kennedy was more ambivalent about the D10 arguing that it was fine to join the group not to lead it while Raine felt a democratic alliance should be loose and aspirational: a D70+ might be just as desirable to encourage states to democratise and avoid creating adversarial relations with non-democratic allies.

British policymakers look minded to tilt back towards the sea: towards Great Power Competition, and away, if only relatively, from land war and counter terrorism. There are innumerable scenarios where one can imagine the UK regretting the choice, as Raine emphasised. By calibrating for potential competition with China, the UK is aligning itself with a contest which is likely to play out militarily, if it does so at all, far from its shores at a scale beyond its means, as Kennedy noted. But investments in space, cyber, AI, and naval force all signal, as Joshi indicated, a UK intent to remain not only relevant to great power competition but focussed on capabilities that are likely to grow in future importance. Middle powers face hard military spending choices which speak not only to their predictions about the nature of war and security but of geopolitics too: Britain looks resolved.