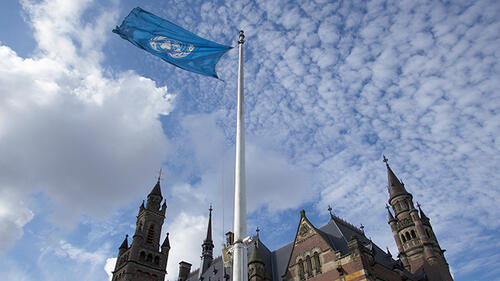 On March 16, by a vote of 13–2, the International Court of Justice (ICJ) in the Hague issued a landmark ruling ordering the Russian Federation and its paramilitary forces to immediately suspend its military operations in the territory of Ukraine.

Only judges from the Russian Federation and China dissented. The ICJ is the United Nations’ court for resolving disputes between nations, established in June 1945 by the Charter of the United Nations and seated at the Peace Palace in The Hague, The Netherlands. With the provisional measures order, the World Court added its authority as principal judicial organ of the United Nations to international demands that Russia stop its invasion of Ukraine.

The Court’s Order vindicated the request of a team of lawyers, including Sterling Professor of International Law Harold Hongju Koh, who argued on behalf of Ukraine on March 7 in a suit filed against Russia at the International Court of Justice (ICJ) in the Hague.

On Feb. 26, Ukraine requested an urgent decision ordering Russia to halt all military action after its invasion last week. The request argued that Russia had created a judicial dispute regarding the application and interpretation of the 1948 Convention on the Prevention and Punishment of the Crime of Genocide (“Genocide Convention”), which both Russia and Ukraine have ratified.

“Today’s ruling should strengthen the resolve of every country, and every international institution, now to reinforce the Court’s order, stop Russian aggression, sanction the perpetrators, and bring them to justice.”
—Professor Harold Hongju Koh

The Court granted all key elements of Ukraine’s request. Under today’s provisional measures order, Russian military and irregular armed groups supported by Russia are required to immediately suspend all military operations in the territory of Ukraine. The Court’s order recognizes the Ukrainian people’s urgent need for protection against Russia’s unlawful aggression and attacks on civilians. The Court’s order, which is legally binding under international law, orders Russia immediately to comply with the order.

“This is a landmark victory for Ukraine and international law,” Koh said. “The ruling presumptively repudiates Russia’s claims that it is acting lawfully to prevent genocide and recognizes that Putin and Russia are isolated outlaws in an interdependent world of international law. By finding prima facie jurisdiction, the ICJ ensures that the case before it will continue, where Ukraine will now have the opportunity to present in detail its claims and evidence, and seek full reparation for all the damage caused by Russia’s unlawful acts.”

Koh rejected the argument that the World Court has no enforcement authority.

“Of course, the same could be said for every court, including the U.S. Supreme Court,” he said. “Now that the ICJ has said what the law is, it has dispelled any veneer of legality around Putin’s actions. That brands him as an outlaw, further isolates him, and strengthens the case for further sanctions and accountability measures if he persists. Today’s ruling should strengthen the resolve of every country, and every international institution, to reinforce the Court’s order, stop Russian aggression, sanction the perpetrators, and bring them to justice.”

Koh is Sterling Professor of International Law at Yale Law School, where he has taught since 1985, and served as Dean from 2004­–09. He is one of the nation’s leading experts in public and private international law, national security law, and human rights. From 2009–13, he served as the 22nd Legal Adviser of the U.S. Department of State in the Obama Administration, and in 2021, he returned to the Office of the Legal Adviser at the start of the Biden Administration as Senior Adviser, the senior political appointee in that office.

Russia had claimed “that acts of genocide have occurred in the Luhansk and Donetsk oblasts of Ukraine” as a basis for launching what it calls a “special military operation” against many Ukrainian cities. Ukraine’s application argued that “[t]he parties…have a factual dispute as to whether genocide, which is defined by Article II of the Genocide Convention, has occurred or is occurring in the Luhansk and Donetsk oblasts of Ukraine.” And that “the parties also have a legal dispute as to whether, as a consequence of Russia’s unilateral assertion that genocide is occurring, Russia has any lawful basis to take military action in and against Ukraine to prevent and punish genocide pursuant to Article I of the Genocide Convention.” The Court today found sufficient grounds to conclude that this dispute exists creating prima facie jurisdiction for the Court to proceed on the merits.

Russia declined to appear in the oral hearing held before the World Court on March 7, and the Court cast severe doubt on Russia’s claims in its ruling. Koh said, “Ironically, Russia’s lies gave prima facie jurisdiction to the Court, and authorized it to issue its important ruling against Russia today.”

In addition to Koh, Ukraine is represented before the ICJ by a team of litigators from Covington & Burling LLP, along with Professor Jean-Marc Thouvenin of Paris-Nanterre University. Ukraine’s Agents before the Court are Anton Korynevych, the Permanent Representative of the President of Ukraine in the Autonomous Republic of Crimea, and Oksana Zolotaryova, Director of the International Law Department in the Ministry of Foreign Affairs of Ukraine. Koh was previously involved in a Ukrainian case against Russia at the ICJ in 2017, after the downing of Malaysia Airlines Flight 17, when the Ministry of Foreign Affairs reached out for legal advice. That earlier relationship led to Koh’s involvement in the current case.