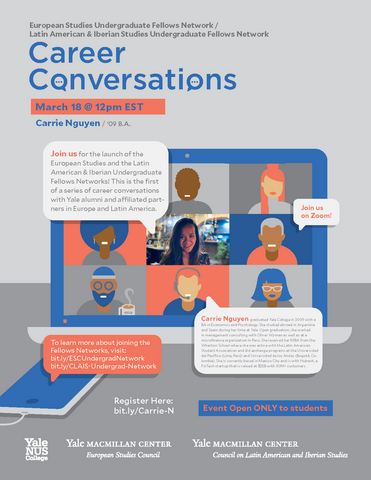 Join us for an informal career and professional journey conversation with Yale College alumna, Carrie Nguyen. Carrie graduated Yale College in 2009 with a BA in Economics and Psychology. She studied abroad in Argentina and Spain during her time at Yale. Upon graduation, she worked in management consulting with Oliver Wyman as well as at a microfinance organization in Peru. She received her MBA from the Wharton School where she was active with the Latin American Student Association and did exchange programs at the Universidad del Pacífico (Lima, Perú) and Universidad de los Andes (Bogotá, Colombia). She is currently based in Mexico City and is with Nubank, a FinTech startup that is valued at $25B with 30M+ customers.