This conference will bring together graduate students from across disciplines - political science, cultural studies, history, environmental studies, economics - to discuss the most pressing challenges facing Europe today.  Graduate students of Yale University, other universities in the northeast region of the United States, and member institutions of The International Alliance of Research Universities will present and meet together.

Welcome Remarks by Edyta Bojanowska, Professor of Slavic Languages and Literatures; and Chair of the European Studies Council at the MacMillan Center, Yale University

In a period of economic and political instability brought about by the 2012 elections, the war in Ukraine, and the devaluation of the ruble, Russia is again in a moment of social and cultural transition. This panel will examine how areas of cultural production, such as theater, literature and film, reflect the current situation in Putin’s Russia.

The European environmental discourse and policies have transformed dramatically over the past three decades. Depending on the immediate ecological issues and socio-economic conditions, current national concerns about environment vary across Europe, including the costal and circumpolar regions and post-socialist states. Environmental programs and debates shape European life on various scales, from the local practical measures around energy conservation and recycling to the pan-European paradigms of ecological modernization and sustainable development. This panel will present interdisciplinary analysis of continuous environmental transitions in Europe and Russia.

Despite the recent economic growth, Europe faces considerable economic challenges. Against the backdrop of a volatile global economy, the European Union faces the challenges of ongoing Brexit negotiations, growing north-south economic divide, and Italy’s protracted economic difficulties. This panel will discuss the understand the current challenges that European economies face, and solutions that policymakers can implement to address those challenges.

Her Excellency Ambassador Milica Pejanovic-Djurisic, (Permanent Representative of Montenegro to the United Nations) with an Introduction by Steven Wilkinson, Nilekani Professor of India and South Asian Studies; Professor of Political Science and International Affairs; Professor in the Institution for Social and Policy Studies; and Henry R. Luce Director, MacMillan Center for International and Area Studies

This panel will explore the limitations of the existing security architecture in Europe and Eurasia, changes to the security environment, the developing perceptions of security threats by different European states, along with the opportunities and challenges these transformations entail. Interdisciplinary and innovative approaches are discuseed to meet the dynamic and multidimensional nature of this topic.

This panel will address the wide-reaching implications of migration in Europe in the current political climate. From Brexit to the Syrian refugee crisis, migration has become a pressing legal, political and cultural question across Europe. This panel will present both interdisciplinary and targeted studies that address these issues. 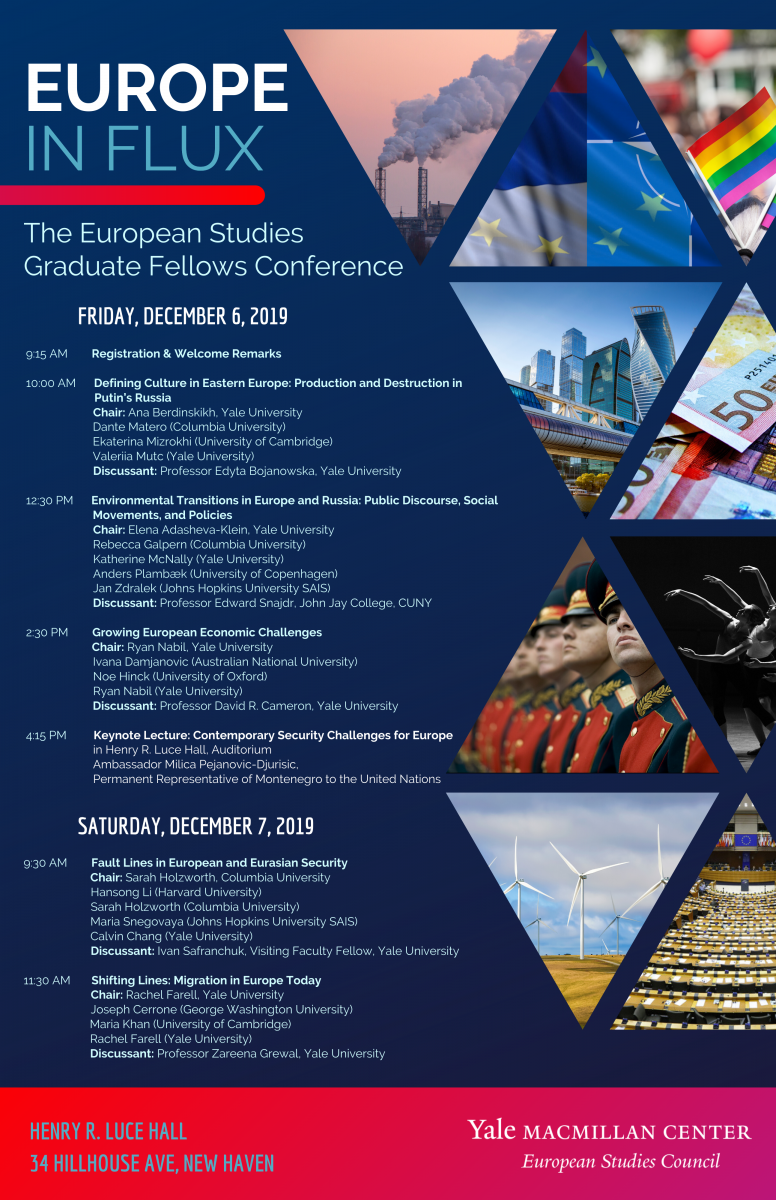