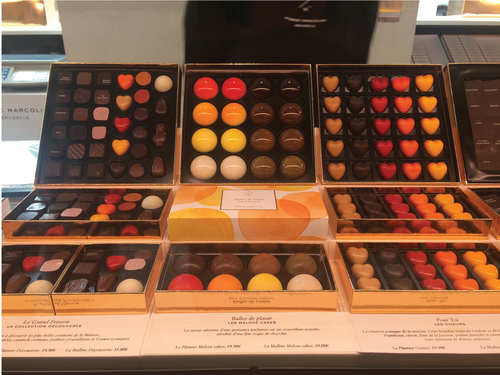 Monday, January 13, 2020
Emily Sigman is a joint degree MA Global Affairs and MA Forestry candidate at the Jackson Institute and School of Forestry. Her research interests in Europe span the intersecting fields of agriculture, climate resilience, and geopolitics.
I traveled to Belgium via commercial cargo ship and rail to support  my research on the global cocoa supply chain.  Belgium is a chocolate mecca: it is home to the  largest cocoa processing factory on the planet, features dozens of the world’s finest chocolatiers and boasts one of the globe’s highest per capita consumption rates of chocolate.  Belgian chocolatiers invented the praline, and continue to enjoy global prestige for their outsized skill and creativity, commanding extraordinary  prices on finished chocolate confections.
Yet cacao is a plant that originates in South and Central America, and today the vast majority of cacao is sourced from West Africa, where it suffers from a number of socio-ecological maladies (among them: labor rights abuses, environmental degradation, unfair trade, and severe pest pressure).  Tracing cocoa from its production in West Africa, to its transportation via global freight ships, to its manufacture and sale in Belgium is allowing me to draw out conversations on ethics, sustainability, and legacies of colonialism as they manifest in the psychoactive, tremendously complex, mysterious and yet ubiquitous concoction that is chocolate.
My first visit to Belgium was productive.  Activities and highlights included:
Key takeaways include:
Future visits (pending: May 2020) will include tours of large factories, storehouses and processing plants in Switzerland and Amsterdam