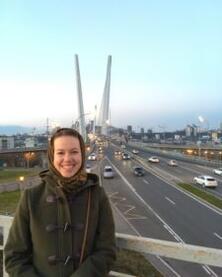 Lauren Woodard is a cultural anthropologist and Postdoctoral Associate at the MacMillan Center. Her research focuses on migration, race, and national identity along the Russia-China border. Based on 13 months of ethnographic fieldwork conducted among government officials and immigrants in Moscow and Vladivostok, her book project, Alike but not the Same, examines tensions between inclusion and exclusion in Russia’s migration policies.

While at Yale, she is also developing a second project, “Yeast for the Russian Land,” that examines Russian Old Believers’ relationships with the state and Indigenous communities as they immigrate from Bolivia to eastern Russia to farm soybeans, a growing crop in the region as the climate warms. Drawing on interdisciplinary scholarship on migration, borders, and climate change and Indigenous scholarship on settler colonialism, this project will explore how officials, Old Believers, and Indigenous communities adapt to the opportunities and challenges of climate change and mobilize claims to resources and belonging in Bolivia and the Russian Far East.

Lauren received her PhD (2019) and MA (2015) in Anthropology from the University of Massachusetts-Amherst and her BA (2011) in Russian Civilization from Smith College. Her work has been funded by the Kennan Institute, Social Science Research Council, Wenner-Gren Foundation, and Fulbright and published in the Political and Legal Anthropology Review and REGION.