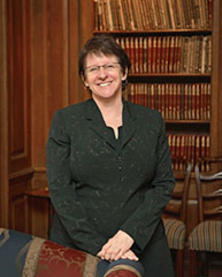 Julia Adams teaches and conducts research in the areas of state building; gender and family; social theory and knowledge; early modern European politics, and colonialism and empire. Her current research focuses on (1) large-scale forms of patrimonial politics; (2) the historical sociology of agency relations and modernity, and (3) gender, race, and the representation of academic knowledge on Wikipedia and other digital platforms.

Adams received a National Science Foundation grant for Collaborative research with Hannah Bruckner (Vice-Provost for Faculty Diversity, NYU-Abu Dhabi) on “Wikipedia and the Democratization of Academic Knowledge. “ The investigators are analyzing the representation of scholars and scholarship, including gender- and race - specific patterns. One of the project’s goals is to contribute to improving quality and reducing potential bias on digital platforms.

Adams was previously the Arthur F. Thurnau Professor and Associate Professor of Sociology at the University of Michigan. Adams graduated from Reed College and did her graduate work in sociology (with a minor in history and anthropology) at the University of Wisconsin–Madison. She served as 2008-9 President of the Social Science History Association and 2012-13 Chair of the Global and Transnational section of the American Sociological Association.

At Yale she has chaired the department of Sociology; directed the Division of the Social Sciences; the Fox International Fellowship Program, and the International Affairs Council at the MacMillan Center for International and Area Studies. She also served as Deputy Provost for Social Sciences and Faculty Development and Diversity. Adams is currently Head of Grace Hopper College.