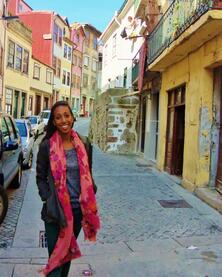 Jacqueline Georgis is a fourth-year doctoral student of ethnomusicology within the Department of Music. Her work explores ideas of cultural hybridity and transnational exchange within the Lusophone-Atlantic. She is particularly interested in researching these themes through the lens of a contemporary Afro-Portuguese-inspired electronic dance music genre from Lisbon, Portugal, asking how this and other electronic musics challenge and re-imagine neo-colonial sociocultural and political configurations in Portugal. Before coming to Yale, Jacqueline received her B.M. in cello performance from the School of Music, Ithaca College (2013), and continued cello performance study under the tutelage of Geneviève Teulieres-Sommer at the École Normale de Musique de Paris, Alfred Cortot (2013-2015) in Paris, France.