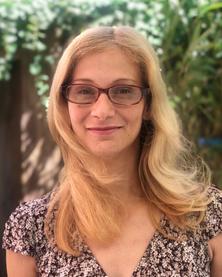 Dr. Aniko Szucs is a performance studies scholar, theatre historian, and dramaturg. She holds a Ph.D. degree in Performance Studies from New York University and Master’s degrees in English, Hungarian, and Communication Studies from Eötvös Loránd University of Budapest, as well as an M.F.A. in Theatre Studies and Dramaturgy from the University of Film and Theatre Arts, Budapest. Her research interests include political performance and surveillance, postcommunism, memory politics, and genealogies of dissidence and resistance in Central and Eastern Europe.

Dr. Szucs’s first book project Contagious Files: The Cultural Memory of State Surveillance in Hungary (planned publication in 2020) examines how contemporary artists and activists use the formerly confidential state security documents of the communist regime to create fictitious—yet historically authentic—narratives and visual representations that contest the morally suspect public discourse on secret collaboration. Her new research focuses on performances of resistance in the ‘illiberal democracies’ of Central and Eastern Europe. While the first manuscript centers on the cultural memory of the perpetrators of commu­­nist surveillance, this new project interrogates surveillance practices by contemporary authoritarian regimes and the tactics of artists and activists to subvert the policing gaze and contest the new forms of repressive power.

As a theatre dramaturg and translator, Dr. Szucs has worked at the Hungarian National Theatre and the Radnóti Theatre, both in Budapest (with director Andrei Șerban), at Portland Center Stage, OR, and the Arena Stage in Washington, DC, as well as with the DiCapo Opera and the Hourglass Group, in New York. Before her academic career, Dr. Szucs was the resident dramaturg of the Vígszínház (Comedy Theatre) in Budapest.

She has published articles in journals in both English and Hungarian, and chapters in the anthologies Artists and Agents: Performance Art and the Secret Services (2019), Secret Police Files and Life Writing (2018), Staging Violent Death: The Dark Performances of Thanatourism (2014), Jews and Theater in an Intercultural Context (2012).