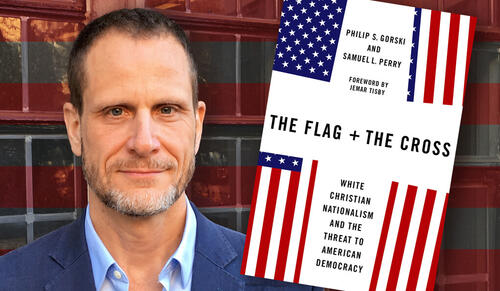 The January 6 insurrection at the U.S. Capitol was a hodgepodge of conflicting symbols.

The protestors erected a large wooden cross and gallows. Some waved Rebel battle flags; others the Stars and Stripes. Some carried signs declaring that “Jesus Saves” while others wore sweatshirts bearing white supremacist slogans. The men who invaded the Senate chamber — some clad in body armor, one wearing a horned headdress — invoked Christ’s name as they bowed heads and prayed.

To many, the clashing imagery was one of many bewildering and unsettling aspects of that chaotic day. To Yale sociologist Philip Gorski, the scene was instantly recognizable as an extreme form of white Christian nationalism.

“The Flag and the Cross: White Christian Nationalism and the Threat to American Democracy (Oxford University Press),” a new book Gorski coauthored with sociologist Samuel L. Perry of the University of Oklahoma, is a primer that relies on historical sources and survey data to explain the ideology, trace its origins and history, and describe the threat it poses to the United States.

Gorski, professor of sociology in the Faculty of Arts and Sciences, recently spoke with Yale News about the roots of today’s white Christian nationalism and the threat it poses to democracy. The interview has been edited and condensed.

What is white Christian nationalism?

Where are the roots of today’s white Christian nationalism?

Gorski: By digging into the historical source materials, you can see this perspective taking shape in the 1690s, which is the title of one of the book’s chapters. In a way, you can trace it back even further, because this idea of a white Christian nation does have roots in a certain understanding of the Bible that weaves three old stories into a new story.

One is this idea of a Promised Land. God bestows a Promised Land on the Israelites. They go to that land and find the Amalekites inhabiting it. They conquered the land. This is how a lot of the early settlers of New England, many of them Puritan, understood their situation. Quite literally, they saw themselves, like the Israelites, as a chosen people. North America was the new Promised Land. The Native Americans were the new Amalekites and the Puritans felt entitled to take their land.

Another strand is the End Times story, which today is viewed as the Second Coming of Jesus in the most literal sense. It’s a belief that Jesus is going to come down to Earth for a final showdown between good and evil. And the Christians in America will be on the side of good.

These two stories describe the “Christian nationalism” in white Christian nationalism. Whiteness came into play when some white Americans tried to develop a justification for slavery. The traditional justification for slavery, theologically speaking, had been that heathens and captives of war could be enslaved. Initially, this is how slavery in America was justified, but a couple of generations later, the justification didn’t really work. You can’t argue that a young boy of African descent born in the Virginia Colony in 1690 was a captive of war. His mother might have converted to Christianity, in which case he’s not a “heathen.” A new justification had to be embedded in the culture, which gave rise to the notorious idea of the curse of Ham. Because Ham had seen his father Noah drunk and naked, God placed a mark on Ham’s son Canaan and condemned his offspring to slavery. Christians used this to justify enslaving people of African descent.

Why is 1690 the origin for white Christian nationalism as opposed to, say, 1776 or 1619, when the first enslaved people were brought to colonial Virginia?

Gorski: The three biblical stories merge in 1690. You can see this very clearly in what is still one of the authoritative histories of early New England, which was written by Cotton Mather III from the great family of Boston preachers. Once this script is in place, it gets revised as time passes. Maybe the Promised Land is out West. Maybe the Native Americans are no longer the enemy, but it’s immigrants from the southern border who represent the threat. The story gets made and remade and becomes a central part of American religious culture as well as secular, popular culture.

What does “freedom” mean to white Christian nationalists?

Gorski: For various reasons, there’s a very individualistic idea of freedom within white Christian nationalism today. It isn’t freedom in the sense of being a democratic citizen working with others to pursue the common good. It is a strongly libertarian, “don’t tread on me” mentality. Historically, it goes together with a certain idea of order that places white men on the top of society with everyone else below them. Anything that threatens that order is seen as a justification for violence.

You can really see this in the Capitol insurrection. It occurred against the background of the Black Lives Matter movement and nationwide calls for racial justice, which white Christian nationalists view as a threat to the racial order. It offends their notion of freedom and liberty. It leads to guys showing up to the Capitol with cattle prods and bear spray ready to beat up police officers in the name of their understanding of patriotism. In the book, we call it a Holy Trinity of freedom, order, and violence.

How did people with sincerely held Christian religious beliefs come to view Donald Trump as their champion?

Gorski: We should recognize that a surprising number of Trump’s Christian supporters really do believe that he is sincerely devout. They think this because he’s kind of played along with the idea and because people they trust, such as Franklin Graham and other prominent evangelical pastors, have told them that Donald Trump is a good Christian.

I think there are others who realize he’s not a devout Christian, perhaps not Christian at all, but they see Christianity as under attack and believe that he will stand up for it. If they are choosing between a politician who has religious faith and somebody who is prepared to fight, they prefer the person with the fight to the person with the faith.

What kind of threat does white Christian nationalism represent to American democracy?

Gorski: It’s a very serious threat. We should of course be clear that there’s not any inherent contradiction between Christianity and democracy. In fact, I think one of the remarkable things about the United States has been that, for most of our history, Christianity and democracy have complemented each other very well. Democracy brought religious freedom to different groups of Christians. But the right and the Christian right have taken a sharp, authoritarian turn in recent years for many reasons. My previous book, “American Babylon,” sought to understand them.

White Christian nationalism is a dangerous threat because it’s incredibly well-organized and powerful. There’s absolutely nothing like it on the left. The white Christian nationalists boast local and national networks that can raise money and to turn people out to the polls and to school board meetings or protests. They can effectively communicate messages and support policies that are out of step with liberal democracy, such as the coordinated attack on voting rights.

Even if Donald Trump is not the GOP candidate in 2024, and I think he’s still the odds-on favorite to be the nominee, it’s very likely that whoever the Republicans nominate will espouse a platform that aligns with white Christian nationalism because it’s popular with the Republican base and those are the folks who vote in Republican presidential primaries.