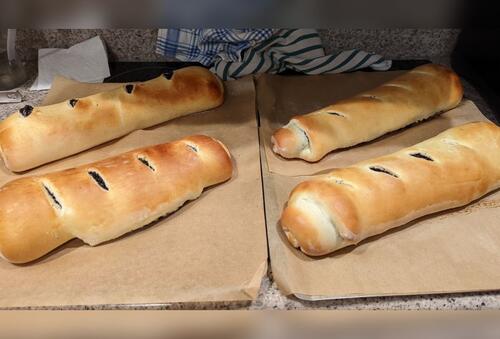 Irina Esterlis, PhD, felt a range of emotions after war broke out in herhomeland of Ukraine, where she still has family.

Anger and helplessness were replaced by sadness and despair over the loss of lifeand destruction of cities and villages. She put her work on pause. For days all shecould do was cry.

“And then I was like I need to do something,” said Esterlis, associate professor ofpsychiatry at Yale School of Medicine. “And what do I do best?”

“If I was there (in Ukraine) I’d be making bombs. That’s my personality. I wouldn’tjust sit there and do nothing,” she said. “So, if I can’t make bombs, I’m going tomake bread.”

Not just any bread, but a special Ukrainian stuffed poppyseed roll that Esterlis remembers eating – but not necessarily enjoying – when she was child growing upin Ukraine, where she lived in Kyiv until she moved with her family to the UnitedStates in 1989. Now this treat has become a much-coveted staple that she and herfamily enjoy.
Baking from scratch gave Esterlis relief from the stress of watching the news andseeing her homeland being erased by Russian bombs.

Then she had a thought: What if she offered to bake this special bread for people inexchange for them donating to charities that are providing humanitarian aid to theUkrainian people and paying for equipment to help soldiers fight against theRussians?

She set the minimum donation at $100 and emailed co-workers and friends. Herhusband, Donald, put a post on social media. Immediately donations began comingin, and Esterlis got out her rolling pin and began baking. Before long she had raisedover $6,000 for the cause.

“I’m not seeking attention. This is what I could do to help,” she said. “Imagine ifwhere you grew up was getting leveled and everybody was getting killed. All I wantis for the war to stop.”

Esterlis came to the U.S. from Ukraine 33 years ago. She went to high school inAmerica, received her undergraduate degree from the University of Buffalo, thendid her master’s and doctoral work at the University of Connecticut.

“If I was there (in Ukraine) I’d be making bombs. That’s my personality. I wouldn’t just sit there and do nothing,” she said. “So, if I can’t make bombs, I’m going tomake bread.”

She came to Yale in 2004 for her internship and postdoc work and then joined thefaculty in the Yale Department of Psychiatry, where she works as a researcher.

Esterlis is not alone. There are many professionals at Yale with ties to Ukraine.Esterlis and colleagues from Internal Medicine, Surgery, Obstetrics, Pediatrics, andothers formed a group, “United for Ukraine.” They are raising awareness about thewar. They are fundraising to support established charities and to deliver medicalsupplies to Ukrainian hospitals where life-saving equipment is running short. All areworking for Ukraine’s survival since Russia’s invasion.

Esterlis still has family and lifetime friends in Ukraine, the Kyiv and Odessa regions,but also has family in Moscow. “I don’t know who I’m more scared for,” she said,adding that she worries for people in both countries.

Baking has been a distraction since the war broke out. It has always been a form ofstress relief for Esterlis, who said she used to enjoy art and dancing before herschedule got too busy.

“To me it’s about being active,” she said. “If I sit and relax my brain is churning butI’m doing nothing. (Baking) is active, working with your hands where you’re doingstuff and thinking I will bring pleasure to someone who is eating it, knowing theywill enjoy it.”
She is well equipped to handle the expected influx or orders for her bread, whichshe creates from her own recipe with inspiration from authentic Ukrainian recipesshe has found online.

Last year for Mother’s Day she got a professional mixer, and she has two ovens at home. She found a good source for flour and is enjoying creating homemade breads knowing that the money they are generating is making a difference in Ukraine.

People can either donate to her directly, or can send money to three charities that are assisting Ukrainians:

Money sent to Esterlis will be used to buy, among other things, bulletproof vests, helmets, and other military equipment for Ukrainian volunteer fighters at the war front, she said. Proceeds will also fund medical equipment and medication supplies to military hospitals across Ukraine, from Lviv in the West, Kyiv at the heart and Kharkiv in the East of the country.

The work has consumed Esterlis for a few weeks and has helped her manage the helplessness felt by so many people who just want the war to end.

“Just having more things to do and finding more people to help gives you purpose,” she said. “All you want to do is help.”