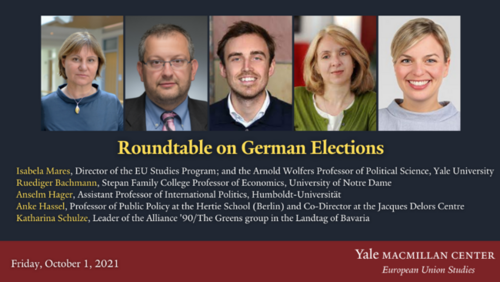 The official results of the parliamentary elections in Germany have been published. The Social Democrats won the victory in the Bundestag elections. They have already refused to go into coalition with Merkel’s party. The Social Democratic Party (SPD) and its representative Olaf Scholz won 25.7% or 206 seats. Christian Democratic and Christian Social Union (CDU/CSU), led by Armin Laschet, won 24.1%, 196 seats. Scholz has already announced that he has no plans to form a coalition with Merkel’s party, the CDU/CSU bloc.

On October 1st, 2021, the Roundtable on German Elections was hosted at the EU Studies Program of the MacMillan Center at Yale University. The discussion on zoom was moderator by Isabela Mares, Director of the EU Studies Program, and the Arnold Wolfers Professor of Political Science at Yale. To watch the entire recording of the event, see video here.

Anselm Hager, Assistant Professor of International Politics, Humboldt-Universität, noted that CDU/CSU lost the most, finishing on the second spot. He outlined that “voters wanted something new, CDU does not just fail to mobilize its base – they simply lost it, while youth leaned to vote for The Greens and Liberals.”

Katharina Schulze, Leader of the Alliance’ 90/The Greens group in the Landtag of Bavaria, mentioned that Germany is now facing exciting times, mainly because first time in 16 years, there is “a window of opportunity for other parties to lead the government.” She also added that The Greens, even though they are now the third-largest party in the Bundestag, are experiencing a certain dissatisfaction since the party had hoped for a better result and is ambitious to offer the country its own Chancellor.

Anke Hassel, Professor of Public Policy at the Hertie School (Berlin) and Co-Director at the Jacques Delors Centre, also pointed out that the CDU/CSU was the largest party for too long, a party epitomizing the status quo, and consequently, they lost popularity before they knew it, especially among the youth. She said that “CDU/CSU messed up the election campaign and missed the generational shift.”

Ruediger Bachmann, Stepan Family College Professor of Economics, University of Notre Dame, emphasized that, as things stand, Armin Lachet and CDU/CSU are in an all-or-nothing situation.

One Yale graduate student asked the participants to clarify where the AfD (Alternative for Germany - an extreme right-wing party) fit into these results and why they lost ground? Professor Anke Hassel pointed out that “the results for the AfD are driven by three factors: the deep disappointment with the CDU/CSU in the Eastern part of Germany; the ongoing migration pressure and the radicalization of the AfD.”