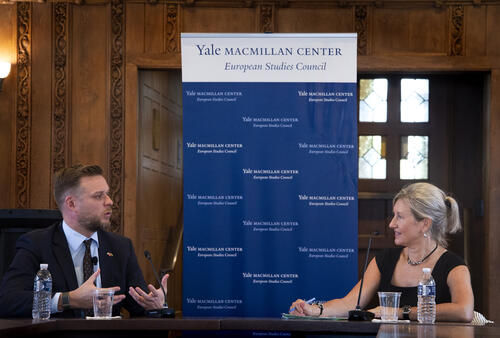 On September 19, the MacMillan Center’s European Studies Council and the Baltic Studies Program hosted Minister of Foreign Affairs of Lithuania Gabrielius Landsbergis at Yale. During his visit, Foreign Minister met Yale leadership and joined a Q&A with students and faculty, sharing his view on the Trans-Atlantic relations and Russia’s War in Ukraine.

President Peter Salovey welcomed Foreign Minister Landsbergis to Yale, and they exchanged views on the role of the Lithuanian Jewish (Litvak) heritage in the US, the Baltic Studies Program at Yale, and ways to enhance Russian and Eastern European Studies in the US by deepening ties with academia in the Baltics.

Following the meeting with President Salovey, Minister Landsbergis spoke as part of a hybrid talk (in-person and via Zoom) which included over 50 students and faculty in attendance and over 60 participants via Zoom. Professor Steven Wilkinson, Vice Provost for Global Strategy and the Henry R. Luce Director at the Whitney and Betty MacMillan Center for International and Area Studies, offered introductions, and Professor Edyta Bojanowska, Chair of the European Studies Council at the MacMillan Center and the Department of Slavic Languages and Literatures, moderated the talk.

See here for the video of the talk.

The talk was supported by the George Herbert Walker, Jr. Lecture Fund in International Studies at the Yale MacMillan Center for International and Area Studies.