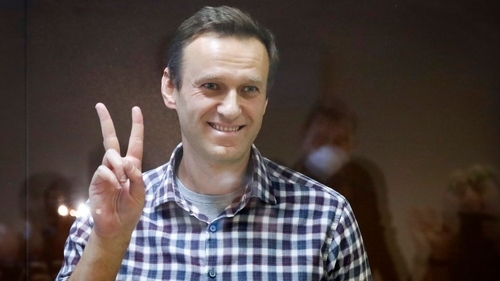 On January 17, Alexei Navalny returned to Moscow from Berlin, where he had been treated after having been poisoned with Novichok, a deadly chemical nerve agent, while campaigning in Tomsk in August for upcoming local elections. Landing at Sheremetyevo, he was immediately detained and, at a hearing the next day, was remanded in custody for 30 days pending a court appearance for failing to appear periodically for meetings as required when his 2014 sentence for embezzlement was suspended.

In a court hearing on February 2, the Federal Penitentiary Service, claiming that Navalny had failed to appear periodically after his sentence was suspended—evidently, being poisoned and nearly killed is not a sufficient reason for missing a parole meeting—asked for the original 3½ -year sentence to be reimposed. The judge did so but subtracted the ten months Navalny had spent under house arrest prior to having the sentence suspended, which meant he would face two years and eight months in prison. On February 20, a judge in a Moscow City Court, rejected Navalny’s appeal but reduced the sentence by two months to 2½ years.

On the same day, Navalny was found guilty in another court of slandering and defaming a 94-year-old World War II veteran who had supported a yes vote in last year’s referendum on constitutional amendments proposed by President Vladimir Putin. The amendments, if approved, would, among other things, allow him to be reelected to two more six-year terms in 2024 and 2030, despite the fact that he was elected president for two four-year terms in 2000 and 2004 and, after serving as Prime Minister for four years, was elected for two six-year terms in 2012 and 2018. Navalny had said the veteran and others who supported the amendments, which were approved by 79 percent in the June 25-July 1 referendum, were “a disgrace to the country. People without conscience. Traitors.” He was found guilty and fined 850,000 rubles (about $11,500).

On February 22, the foreign ministers of the EU, meeting as the Foreign Affairs Council, agreed to impose new restrictive measures on Russian officials in addition to those already imposed in October on a half-dozen officials, including several members of Putin’s executive office and the director of the Federal Security Service, the FSB, it had concluded were responsible for the poisoning of Navalny. After the meeting, Josep Borrell, the EU’s High Representative for Foreign Affairs and Security Policy and Vice President of the European Commission, said there was “a shared assessment that Russia was drifting towards an authoritarian state and away from Europe” – which of course is old news. He added, “The Ministers unanimously interpreted Russia’s recent actions and response as a clear signal of not being interested in cooperation with the European Union. On the contrary, it looks interested in confrontation and disengagement from the European Union….In response to events around the situation of Mr. Navalny, we reached a political agreement to impose restrictive measures against those responsible for his arrest, sentencing and persecution. In doing that, for the first time ever, we will make use of the European Union Global Human Rights [Sanctions] Regime.”

After the foreign ministers reviewed and approved the measures yesterday, today the EU formally imposed restrictive measures—i.e., sanctions—for serious human rights violations and abuses on four senior Russian officials it believes are responsible for Navalny’s prosecution and sentencing: Igor Krasnov, the Prosecutor General of the Russian Federation, equivalent to the Attorney General; Aleksandr I. Bastrykin, the Chairman of the Investigative Committee of the Russian Federation, aka SledKom, equivalent to the FBI; Viktor V. Zolotov, the Director of the Federal Service of National Guard Troops and, in that capacity, commander of those troops and of OMON, the special purpose mobile police units; and Aleksandr Kalashnikov, the Director of the Russian Federal Penitentiary Service (FSIN). EU asset freezes and visa bans have, of course, no effect on such individuals and are undoubtedly regarded by those sanctioned, and their boss, as merit badges. Nevertheless, the EU could not let the prosecution—and persecution—of Alexei Navalny go unanswered.

In imposing those sanctions, the EU coordinated its response with the Biden administration, which has imposed sanctions, including asset freezes and visa bans, on seven senior officials of the Russian government it holds responsible for the poisoning of Navalny and export restrictions vis-à-vis 14 Russian entities involved in chemical or biological production under the U.S. Chemical and Biological Weapons Control and Warfare Elimination Act of 1991.

Meanwhile, Navalny is now in prison. Russia typically doesn’t announce where a person is imprisoned until the person has arrived and been there awhile. But reports on official Russian news outlets suggest he has been imprisoned in Penal Colony No. 2 (IK2) in Pokrov, about 60 miles east of Moscow. It’s a penal colony with a well-deserved reputation for strict enforcement of its rules and harsh treatment of the inmates.

The EU intends to have a strategic discussion about its problematic and deteriorating relationship with Russia when the leaders of the 27 member states meet as the European Council on March 25-26. It’s clear the sanctions imposed thus far by the EU on Russian officials have had no effect on either the individuals sanctioned or the Russian government, and there’s no reason to think the sanctions imposed today will be any different. If the EU is to have any effect in persuading Putin and his government to tolerate dissent and opposition, it must make it clear that failing to do so will have substantial economic and strategic consequences for Russia.

David R. Cameron is a professor of political science and the director of the MacMillan Center’s Program in European Union Studies.