War in Ukraine and a New Transatlantic Agenda 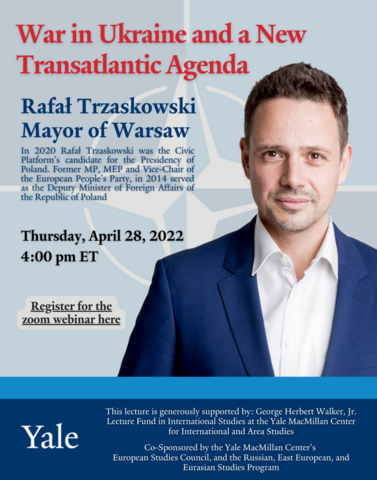 Rafał Trzaskowski is the Mayor of Warsaw since 2018. He is a member of the European Committee of Regions and the Board of Eurocities. In 2020 Rafał Trzaskowski was the Civic Platform’s candidate for the
Presidency of Poland. Former MP, MEP and Vice-Chair of the European People’s Party, in 2014 served as the Deputy Minister of Foreign Affairs of the Republic of Poland and in 2013 as a Minister for Administration and Digitalization in the Cabinet of PM Donald Tusk. Rafał Trzaskowski was born in Warsaw, where he studied and graduated in international relations and English philology at the University of Warsaw. In 2004 he obtained his PhD degree in political science. He speaks fluent English, French, Spanish, Russian and Italian.
Register to Attend on Zoom: https://tinyurl.com/YaleTrzaskowski-April28
This lecture is generously supported by: George Herbert Walker, Jr. Lecture Fund in International Studies at the Yale MacMillan Center for International and Area Studies.
Co-Sponsored by the Yale MacMillan Center’s European Studies Council, and the Russian, East European, and Eurasian Studies Program