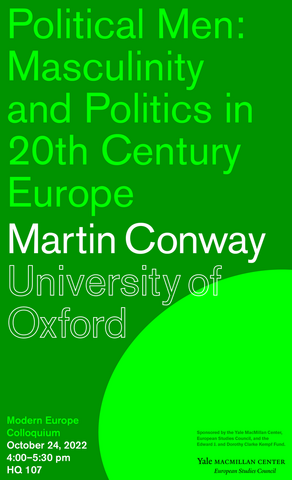 The Modern Europe Colloquium on “Political Men: Masculinity and Politics in 20th Century Europe”
By Martin Conway, Class of 1932 Visiting Fellow, Humanities Council, Princeton University
Location: HQ, Rm 107
Martin Conway is Professor of Contemporary European History at the University of Oxford, and a Fellow and Tutor at Balliol College. His research has been principally concerned with European history from the 1930s to the final decades of the twentieth century. His doctoral thesis explored the history of the extreme-right movement in Belgium, the Rexist movement, during the Second World War. Published in 1993 as Collaboration in Belgium: Léon Degrelle and the Rexist Movement 1940-1944, it was subsequently published in French and Dutch translations. The Catholic origins of the Rexist movement led him on to develop a wider interest in Catholic politics, and he has published a number of books and articles which have looked more generally at the shape of Catholic politics in Europe. Professor Conway has also continued his interest in Belgium, and wrote a large-scale study of Belgium after its liberation in 1944. This was published in 2012 as The Sorrows of Belgium: Liberation and Political Reconstruction 1944-47, and has subsequently also appeared in a French-language translation.
In the last few years, much of his work has concerned the history of Democracy in twentieth-century Europe. He has published a number of articles on the nature of democracy in post-war Europe, and published a large book entitled Europe’s Democratic Age: Western Europe 1945-68, with Princeton University Press in the spring of 2020.
Professor Conway is completing a collaborative project on the history of Social Justice in twentieth-century Europe. He has also begun a new project on Political Men, which seeks to problematise the forms of male political citizenship which have developed in Europe across the twentieth century. Its focus is consciously comparative, embracing a variety of political regimes and periods. Its underlying thesis is that we need to understand how male forms of political action have been a significant influence on the evolution of both democratic and non-democratic regimes.
He also has a strong interest in the concept of the History of the Present, as a distinct era separate from the more familiar span of the twentieth century. He is one of the editors (with Celia Donert and Kiran Patel) of a new book series published by Cambridge University Press, entitled European Histories of the Present.
The Modern Europe Colloquium is generously sponsored by the Edward J. and Dorothy Clarke Kempf Memorial Fund and the European Studies Council of the Yale MacMillan Center