Peter Holquist | The Code of Land Warfare at the 1899 Hague Conference: Russia’s Role and the European Setting 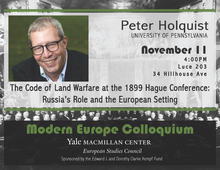 Second colloquium of the Modern Europe Colloquium Fall 2019 Series. Peter Holquist, Ronald S. Lauder Endowed Term Associate Professor of History; Graduate Studies Chair, University of Pennsylvania, will present “The Code of Land Warfare at the 1899 Hague Conference: Russia’s Role and the European Setting”
Peter Holquist’s teaching and research focus upon the history of Russia and modern Europe. He is the author of Making War, Forging Revolution: Russia’s Continuum of Crisis, 1914-1921 (Harvard, 2002) and is Associate Editor forEurope Since 1914: Encyclopedia of the Age of War and Reconstruction(Thomson-Gale, forthcoming 2006). He is founder and editor of the journalKritika: Explorations in Russian and Eurasian History and serves as editor for the Kritika Historical Studies (vol. 1, “The Resistance Debate in Russian and Soviet History,” 2003; vol. 2, “After the Fall: Essays on Russian and Soviet History after Communism,” 2004; vol. 3, “Orientalism and Empire in Russia,” forthcoming in 2006). Holquist has published articles on Russia ‘s experience in the First World War and Russian Revolution, questions of continuity and change from the imperial period into the Stalin era, and other topics.
Holquist’s current project, By Right of War, explores the emergence of the international law of war in the late nineteenth and early twentieth century. Specifically, it analyzes the role of imperial Russia in codifying and extending these “laws and customs of war,” and examines to what extent European militaries, and particularly the Russian army, observed these norms in practice. This project encompasses two distinct areas of analysis. First, it traces how international law emerged as a discipline in Imperial Russia and came to flourish there. This is a story of intellectual and diplomatic history. The second half of the project measures the extent to which these normative principles shaped actual policy. It takes the form of military and political history, examining the Russian army in three cases of military occupation: Bulgaria and Anatolia in 1877-78; Manchuria during the Boxer Rebellion, 1900-1901; and Galicia and Armenia during the First World War. The project, in other words, asks by what means, and to what degree, can one bring people’s conduct, even in extremis, into line with normative and ethical prescriptions?
Holquist received his Ph.D. with distinction from Columbia University in 1995. Prior to joining Penn’s History Department in Fall 2006, he taught for nine years at Cornell University. He offers lecture courses on imperial Russia and the Soviet Union and undergraduate seminars on “Russia in the Age of Anna Karenina” and on “Russia’s Orients: The Caucasus, Central Asia, and the Far East.” Holquist works with graduate students in the fields of Russian history, Soviet history, and the history of modern Europe. Applicants to the graduate program in any of these sub-fields are encouraged to contact Prof. Holquist via email (see above) before the application deadline.