Inside the Deal: How the EU Got Brexit Done 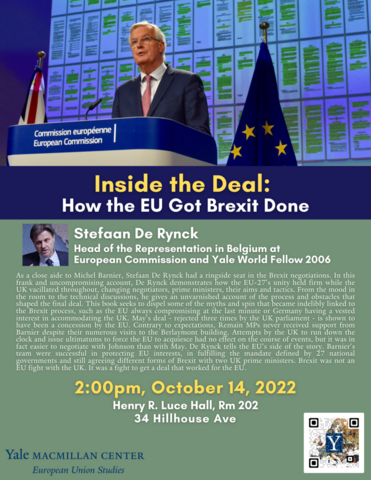 As a close aide to Michel Barnier, Stefaan De Rynck had a ringside seat in the Brexit negotiations. In this frank and uncompromising account, De Rynck demonstrates how the EU-27’s unity held firm while the UK vacillated throughout, changing negotiators, prime ministers, their aims and tactics. From the mood in the room to the technical discussions, he gives an unvarnished account of the process and obstacles that shaped the final deal. This book seeks to dispel some of the myths and spin that became indelibly linked to the Brexit process, such as the EU always compromising at the last minute or Germany having a vested interest in accommodating the UK. May’s deal - rejected three times by the UK parliament - is shown to have been a concession by the EU. Contrary to expectations, Remain MPs never received support from Barnier despite their numerous visits to the Berlaymont building. Attempts by the UK to run down the clock and issue ultimatums to force the EU to acquiesce had no effect on the course of events, but it was in fact easier to negotiate with Johnson than with May. De Rynck tells the EU’s side of the story. Barnier’s team were successful in protecting EU interests, in fulfilling the mandate defined by 27 national governments and still agreeing different forms of Brexit with two UK prime ministers. Brexit was not an EU fight with the UK. It was a fight to get a deal that worked for the EU.
Stefaan De Rynck is an EU civil servant who was a Yale World Fellow in 2006. He worked as a close aide to Michel Barnier, the EU’s Brexit negotiator, from 2016 until 2021 and is currently the Head of the European Commission’s Representation in Belgium. He has written a forthcoming book that describes the EU-UK negotiations and explains how and why the EU remained unified throughout the negotiation and shaped the final deal while the UK vacillated throughout, changing negotiators, prime ministers, aims and negotiation tactics.