The Idea of a Fundamental Opposition between Russia and “the West”: Literature, Politics, Nineteenth-Century Listening 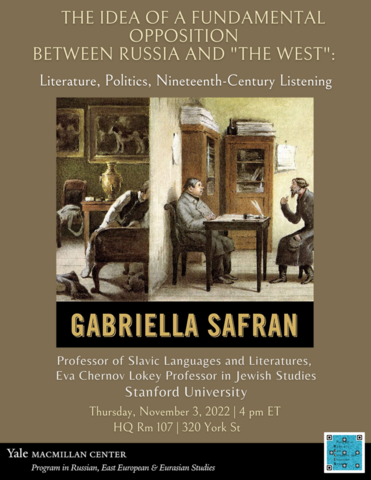 The European Studies Council and the Yale REEES Program present Gabriella Safran, Professor of Slavic Languages and Literatures, Eva Chernov Lokey Professor in Jewish Studies, Stanford University, on
“The Idea of a Fundamental Opposition between Russia and “the West”: Literature, Politics, Nineteenth-Century Listening”
Location: HQ Rm 107, 320 York St.
Bio: Gabriella Safran teaches in the Slavic Department at Stanford, where she is the Eva Chernov Lokey Professor in Jewish Studies. She is a specialist in late imperial Russian and Yiddish literatures, folklore, and lexicography. Her recent books include Wandering Soul: The Dybbuk’s Creator, S. An-sky (Harvard, 2010), the co-edited volume The Whole World in a Book: Dictionaries in the Nineteenth Century (Oxford, 2019), and Recording Russia: Trying to Listen in the Nineteenth Century (Cornell, 2022). She is now working on a new project about the transnational rise of the notion of Jewish voice as comical.