Biodiversity is delicious: A look inside the fruit markets of Saint Petersburg 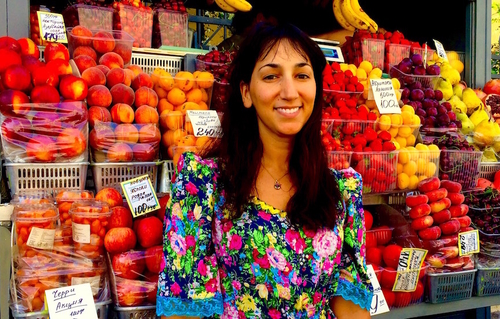 This summer, with support from the MacMillan Center and the Yale Global Food Fellowship, I am studying Russian and exploring one of Europe’s little-known gems: Saint Petersburg’s abundant summertime fruit markets.

Saint Petersburg is one of my favorite cities, and it is a wonderful place to visit in the summer.  There is much to love about it: endless days that fade to twinkling twilight, secret courtyards that shelter innumerable unexpected delights, and architectural amalgamations and originalities that appear on every canal, are but a few.  Perhaps the thing I love most about Saint Petersburg in summer, though, is the profusion of fruits, berries, nuts, and mushrooms that appear spread out on blankets, in pop-up kiosks, and throughout vast open-air markets across the city.

These are no ordinary fruit markets: kerchief-clad women make the journey from the Russian countryside to sell a dozen different kinds of blueberries and chanterelles on sidewalks beside stalls overflowing with apricots, cherries, apples and all manner of fruit brought to Saint Petersburg from Central Asia, from whence both the fruits and many of the people who’ve brought them can trace their biogeographic origin.  If you ask the average Saint Petersburg denizen about fruit in the summertime, they are likely to wax poetically for a not insignificant amount of time about all the different colors of raspberries, the profusion of dacha-grown gooseberries, and the distinction between cherries and real cherries.

Yet outside of Saint Petersburg—despite growing public enthusiasm for small-scale perennial food—few people know that Russia produces more food through perennial, microscale eco-agriculture than any other industrially developed nation by an order of magnitude.  Few people have a sense of what a truly biodiverse perennial market really looks like, and fewer still can comprehend the sheer abundance and biodiversity of the produce in Russian markets specifically.  Few people know the story of the Georgian mafias that ran the fruit markets of the Soviet Union.  Few people know that there is a mass migration of Central Asian refugees fleeing human rights abuses and climate-induced poverty to vend in the fruit markets of St. Petersburg.

My research this summer, therefore, focuses on capturing and communicating these interwoven stories.  In Saint Petersburg, I spend most mornings in the incomparable facilities of the Hermitage, where—thanks to the tremendous support of the MacMillan Center—I take part in the Advanced Russian Language and Culture course offered through the Yale Summer Session in Saint Petersburg.  In the afternoons and on weekends, I take to the streets of the city, on the lookout for fruit vendors and markets.  Over the summer, I’ll be conducting interviews and recording oral histories with the fruit vendors I meet throughout these sojourns, and taking an inventory of the different kinds of fruits, berries, nuts, and mushrooms I encounter.

As a joint master’s degree student at the School of Forestry and Environmental Studies and the Jackson Institute for Global Affairs, I focus my energies on the study of agricultural systems embedded in different socio-political and ecological settings.  I am interested both in the biophysical behaviors of agro-ecosystems, and in the political ecology of agriculture as an expression of relationships between human and non-human agencies. My academic work tends to emphasize the practical study of agroforestry and silvopasture, but I also engage in projects that cover related fields such as plant and fungal physiology, biological conservation, and cultural identity.  Through these overlapping lenses, I aim to construct a narrative that transcends “sustainability” in food systems, and rather, alights possibilities to transform human relationships to food landscapes in ways that encourage the mutual flourishing of inter-species life.

My work in Saint Petersburg will serve as a rich case study for my work at Yale broadly.  Through this project specifically, I seek to make space in the rich public discourse on the human dimensions of sustainable food systems, and give voice to groups of people who are usually left out of these conversations.  I want to tell the inter-species stories of plants and people, in a way that makes them real to others, and in a way that gives agency to both.   I hope to shine light on a living example of what a thriving, perennial, agro-ecological market could look like and offer to the world, while simultaneously drawing attention to the inequities and injustices that threaten (or, perhaps catalyze) the existence of such rich places.